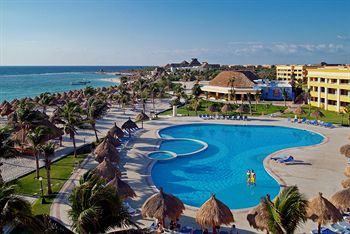 This accommodation offers elegant accommodation and is located in the commercial and financial district of Dubai. The property offers panoramic views of the Arabian Gulf and Sheikh Zayed Road. It also has an outdoor pool and gym.All accommodation units feature modern, elegant décor. Suites add separate living areas, Bose® surround sound systems, iPod docks, and Nespresso® coffeemakers. The bathroom has a flat-screen TV, a bathtub and a rainshower.The Ballarò serves a wide variety of international dishes, while the Cave offers a modern Parisian menu and a large selection of wines. At the Purobeach Urban Oasis, guests can enjoy healthy options. The Conrad Spa is available upon request.The Conrad Dubai is a 2-minute walk from the Dubai World Trade Center and a 20-minute drive from the Dubai International Airport. There is free valet service. Shopping area is a great option for travelers interested in buying clothes, luxury shops and food.

The territory of this province is very fertile throughout its geography , especially the rivers , Ozama , Haina , and Isabela.

Puerto Plata is one of the 31 provinces of the Dominican Republic. It is located in the north of the country. It borders the Atlantic Ocean to the north, east Espaillat province, with Valverde Santiago and south and west of Montecristi.
Puerto Plata is the largest and most important city on the northern coast of the Dominican Republic. Founded in 1502 is one of the major tourist spots of the country. Dozens of hotels line along its coast and receives many of the thousands of tourists who come to Dominican Republic.
Puerto Plata is popularly known as the Amber Coast. This coast is full of this fossilized plant resin and the city has one of the world's leading museums of Amber: The Amber Museum of Puerto Plata.
Similar to the capital Santo Domingo, Puerto Plata has a seafront Malecon or more than 6 kilometers long. At one end is the fort and the fort of San Felipe, one of the first in America and best preserved today. Built in the sixteenth century to defend the island from enemies is now an interesting museum which houses an exhibition of historical photographs, weapons and cannons used in battle for independence.

Puerto Plata also has a similar Corcovado in Rio de Janeiro. The statue of Jesus Christ, 16 meters high is high in the Pico Isabel Torres National Park Pico Isabel Torres. This is a nice excursion we recommend making. You can climb to the top by cable car and from there see a fabulous view of the entire bay of Puerto Plata.


Sosua
On the north coast of the Dominican Republic, found the town of Sosua. It is reached easily after a short crossing between beaches and mountains from the city of Puerto Plata. The road is in good condition and the distance is about 25 km to the east. The town located 15 km east of the International Airport and 25 miles from Puerto Plata, was founded in 1938 by 500 settlers.

Cabarete
It is located about 15 minutes east of Sosua road, on the North Coast of the Dominican Republic. This beach town, located between a bay and a lagoon, is very popular among the youth and the young at heart. The atmosphere is a colorful and casual mix of national folklore, international tourism, the sport of windsurfing and adventure tourism.
Its attractions include the scenery of its mountains, two lakes (Cabarete and Punta Goleta), its caves and its hamlet close descendants of freed slaves brought from the United States in the last century. From the geomorphological point of view is nestled on the coastal plain of Yásica.
Cabarete is known internationally for his exceptional conditions for windsurfing. Its waters have been held several tournament championships World Cup Windsurfing Association and takes place every year the amateur World Cup, the Cabarete Race Week. There are several active windsurfing schools throughout the year.
Samana
Samana is one of the 32 provinces of the Dominican Republic, bounded on the north and east by the Atlantic Ocean, to the south by the Bay of Samana and Monte Plata province and west by the provinces of Duarte and Maria Trinidad Sanchez. Created on June 4, 1867 as Tourist District, Indian named Samana region. It has an area of 853.74 square kilometers and a population of 95,000 people. Samaná is the main city in the region with 52,000 inhabitants.
Visit the National Park Haïtises, strange karst rock formation with very peculiar landscape and wildlife, Cayo Levantado, beautiful island in the middle of the Bay of Samana, El Limon Waterfall, to know the typical local vegetation and life simple and calm in the Dominican countryside.
Also one of the most beautiful excursions in Dominican Republic there is a visit to the Sanctuary of the Humpback whales in Samana Bay and the Silver Bank, located in the northwest of the country where every year, between the months of December and April, about 3,000 humpback whales come to breed in the warm waters off the coast of the Atlantic Ocean.

Among the best tourist attractions in Samana are the following places:
Haïtises National Park: It is an unforgettable tour where we will see as few in the world. It is a paradise that transports us to the time of the dinosaurs.
Cayo Levantado: It's a beautiful little piece of land located in the Northeast coast of the Dominican Republic in the bay of Samana. It has a rainforest vegetation, beaches, white sand and clear waters, set in a very beautiful landscape.
Samana Bay: It has tourist attractions such as the Rincon Beach near Las Galeras Cayo Levantado, a small island in the northeast of the bay, south beside the National Park Haïtises with Cano Hondo, Mangrove China, Miches area with its lakes Limon and Redonda, the Montana Redonda and beautiful beaches near the country's largest. Every year during the mating season Samana Bay is visited by humpback whales, which provide a magnificent spectacle for visitors.

El Limon Waterfall: Located in the rainforest about 15 miles from Las Terrenas Samana. The adventure on horseback and on foot, for almost an hour or more, through the forest with a guide who walks beside the horse guiding the steep path between rocks and mud. When the tour is access to a small waterfall first and then another short trail leads to the largest waterfall about 40 meters, where visitors can take a dip deserved and pure water.
Humpback Whale Sanctuary: The humpback whales that come from the seas of Iceland, Greenland, Canada, and North America, reaching the Caribbean Sea to give birth and dating in the hot water. From January to March, thousands who stay in Samana Bay.

Cano Hondo: "Caño Hondo" where you can challenge yourself to climb a mountain from where you can watch the whole National Park Haïtises or you can choose for a hike where vegetation surrounded by spectacular flora Park meet, achieving a perfect balance between man and Mother Nature.